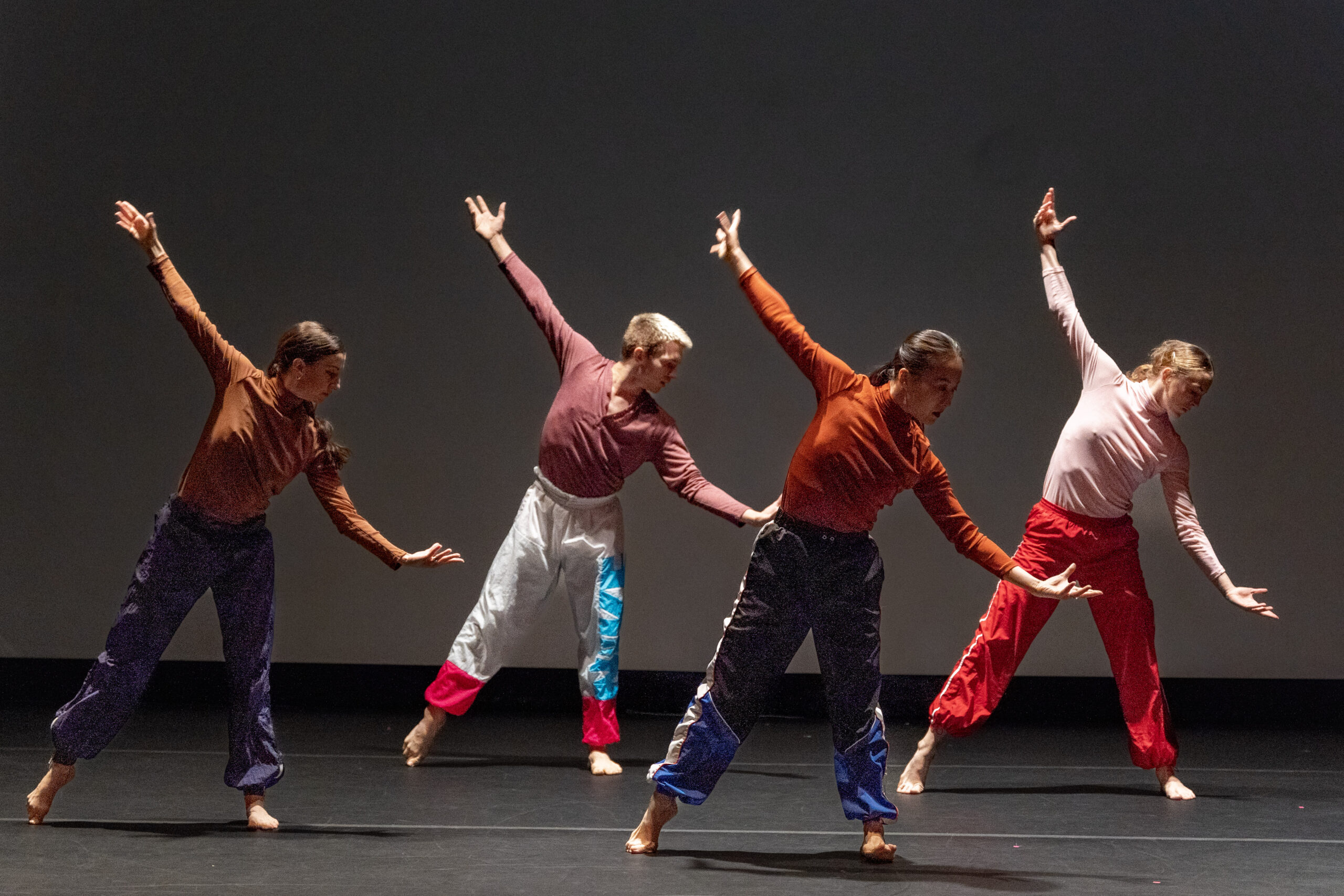 Choreographer: Yin Yue Collaborated with the dancers in the solo and duets.

Music: Multiple tracks were used in the performance

Costume: Yin Yue in collaboration with the dancers

Ripple is the first stage performance by YYDC since the onset of the pandemic. The world premiere emerged from the lingering sense of isolation that resulted from the pandemic. The piece preserved the sensation of dancing together through hand holding, body touching, weight sharing and the enhanced vulnerability that comes from knowing all of these can go away.

Video was filmed at the performance and edited for live streaming.

Citizen is a physically demanding ensemble piece performed by the full company of YYDC dancers. It's dynamic and expressive movement, together with dramatic original musical scoring, explores the intensity of the times we are living now, the challenges we face together and the political environment that surrounds and influences us The dancers and their movements celebrate our common sense of hope and determination.

Stones and Kisses is inspired by the work of scientist and philosopher Carlo Rovelli, who has described our world as made of "Stones" (permanent, eternal) and "Kisses" (momentary, interactive). In the world of Stones and Kisses, were we to live a billion years, we would witness a stone as a momentary aggregation of sand. However, as our time is limited, we experience time based on our momentary interactions - like a kiss or a live performance. In Stones and Kisses, the dancers move through four seasons to illustrate how we experience times's passage through change and interaction.

Yin Yue abstracts the concept of vanishing point in perspective drawing by placing this 2 dimensional concept into a 3D space on stage. The work plays up space harmony and depth perception between the dancers within the space. Vanishing Point was created with the support of 92Y Harkness Dance Center’s Artist in Residence. 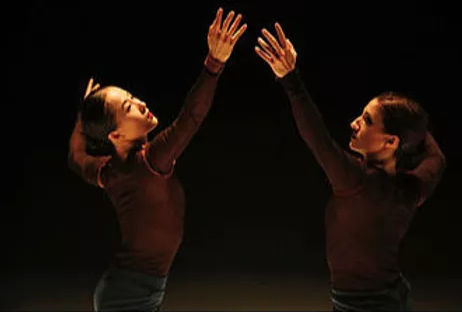 The Time Followed is a duet created by Yin Yue, performed with long time collaborator Grace Whitworth. The dancers often appear as one, yet move separately in shifting and alternating movement sequences. Featuring intricate and closely choreographed movements, the dance creates the illusion of manipulated time, both stretched and accelerated.

Through the Fracture of Light (2017 Trailer)

​Showcasing the company’s original movement technique, FoCo Technique, as well as its signature sleek physicality, Through The Fracture of Lightdemonstrates the versatility and range of its dancers as well as Yin Yue's ability to weave strong rhythmic movement with quiet grace and agility.

Fierce group sections seamlessly transition into duets and then back again, culminating with a group composition that builds and grows and amplifies in intensity. The audience is brought to their emotional edge as dancers push on tirelessly toward this final energetic apex. 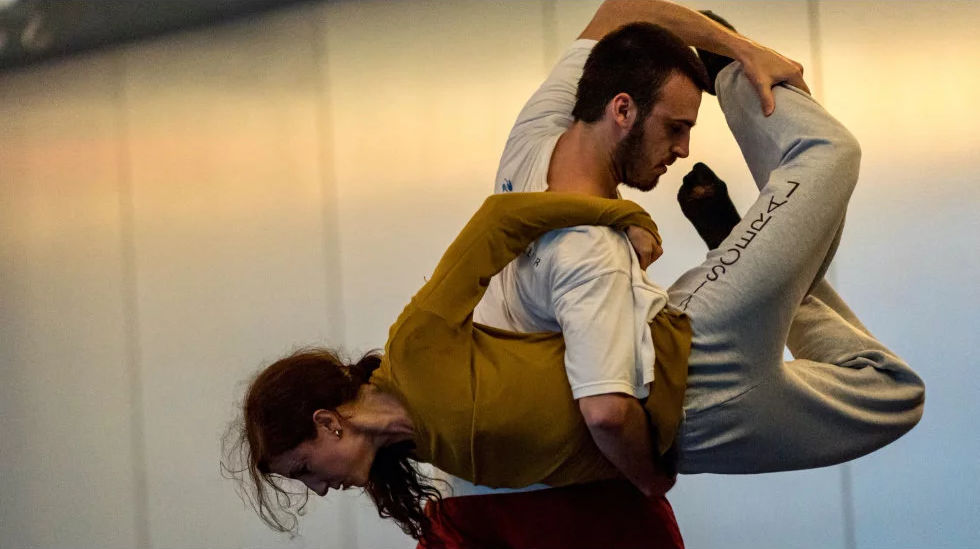 The Disappearing Element of Existing

The dance will center around the concept of time, memories and our unique and personal interaction with it. The dance explores the physical and emotional possibility to demonstrate the passing and the stillness of time as well as how the losing of time affects our behavior and our fading memories and how much we would like to hold on to the pieces of it.

The Edge of 30 Degrees is Yin Yue’s latest original creation for her namesake company YYDC.

The performance runs approximately for 90 min (with intermission) includes three world premieres: “The Time Followed,” “Stones and Kisses,” and the highly anticipated ensemble piece, “Citizen.” This exciting evening of new dance works is centered around the concept of time and our interactions with time itself. To create these innovative projects, Yin has assembled an impressive team of collaborators, featuring the dancers of YYDC, costume designer Barbara Erin Delo, lighting designer Christopher Chambers, and composers Juliane Jones and Doug Beiden who have created original musical scores exclusively for Yin’s new work.

​The prestige Dutch newspaper De Volkskrant praise the choreographer “With the relaxation of tai-chi, but also the acrobatics, speed and graceful lines of Chinese dance, Yin Yue is a promising new voice in the long tradition of modern dance.”

This production will be presented from May 30 to June 1 at 7:30pm at BAM Fisher (Fishman Space) in Brooklyn, New York. Tickets are currently on sale.

An evening of dance works by Yin Yue and YYDC

A 90 min program will feature three unique dance works, the most recent creation Vanishing Point, a solo performance by Artistic Director Yin Yue in its virtuoso improvisation form, and rounds off the night with dynamic powerhouse full company casts repertory Through the Fracture of Light.

Vanishing Point, a new work of 5 dancers, was created through the generous support of 92Y Harkness Dance Center’s Artist in Residency program. Yin Yue abstracts the concept of vanishing point in perspective drawing by placing this 2 dimensional concept into a 3D space on stage. The work plays up space harmony and depth perception between the dancers within the space. The work takes the abstract idea one step further into the emotional depth of existence and disappearance as well as the interaction between the performers.

New York Times Critic Brian Schaefer describes Yin’s solo in his NYTimes listing “controlled tension and the sparse lighting and chilling soundscape she favors add to an ominous atmosphere that Ms. Yin punctures with quick, precise gestures or paints with melting bodies.” Her improvised solo, an excerpt from full length production Within Reach, will be nothing short of her signature razor sharp strike and water like movement. The live performance of this solo won First Place in Choreography in Shanghai Professional Dance Competition in 2016.

Through the Fracture of Light, a full company work, premiered in March 2016 at Schrit_tmacher Festival in Aachen Germany. The work features original music by Juliane Jones and Doug Beiden. The work as also been featured on platforms like SummerStage 2017, Open Doors Dance Festival, and Jacob’s Pillow Dance Festival.

A Glimpse Inside a Shared Story

A brief glance into one's life while being observed by others, this piece demonstrates the layers of perceptions and mysterious outlook of an unknown.

The world is massive and unknown, we enter as fighters with the spirit to conquer and dominate, yet the true power lies in the gentle touch, generous support and trust of those that surround us. Through physical and dynamic performance, each of us find peace and comfort within ourselves as well as within each other. Are we able to hold on to what we have found? It is too soon to tell. There are more adventures ahead and we will journey them together.

Description: Started in a sharpe diagonal line, 4 dancers each holds her own space, equal distance to each other. That is the distance we can see and measure. There is another kind of distance that we can only feel, the distance of mind and the distance of heart. The quartet explores the concepts of distance, someone is within reach yet out of reach at the same time. The dance is set to a score that builds to a dramatic and nearly explosive height with a suddenly end that is equally dramatic and unexpected.

An intricate and exquisite duet between two female dancers, this piece portrays twin identities that grow apart ever so subtly. Throughout the piece, the relationship between the two dancers remains strong - when they are apart they are two entities, but together they are one pair. The dancers' smooth tactile partnering evokes a visceral reaction from the audience while Yin Yue's concept touches upon a relatable kinship that hints at a meaning deeper than the eyes can see.

The flowing ambient piano track by composer Machinefabriek underscores the piece with a subtle yet emotional undertone.

New York Times Critic Brian Schaefer describes Yin’s solo in his NYTimes listing “controlled tension and the sparse lighting and chilling soundscape she favors add to an ominous atmosphere that Ms. Yin punctures with quick, precise gestures or paints with melting bodies.” Her improvised solo, an excerpt from full length production Within Reach, will be nothing short of her signature razor sharp strike and water like movement. The live performance of this solo won First Place in Choreography in Shanghai Professional Dance Competition in 2016. Be sure to look out for elements of her long-developed movement research FoCo Technique in this solo.

Stay up to date with YYDC programs and performances!